We weren’t really looking to go away for the weekend when Chris had a spontaneous browse on the British Airways website. We booked on the Thursday morning to enjoy a weekend in Athens – all at the cost of 5,000 Avois, £125 of Wizzair credit we had forgotten about and £64.50 cash each. We stayed in this apartment which I must recommend for its ease of access, location & general cleanliness. 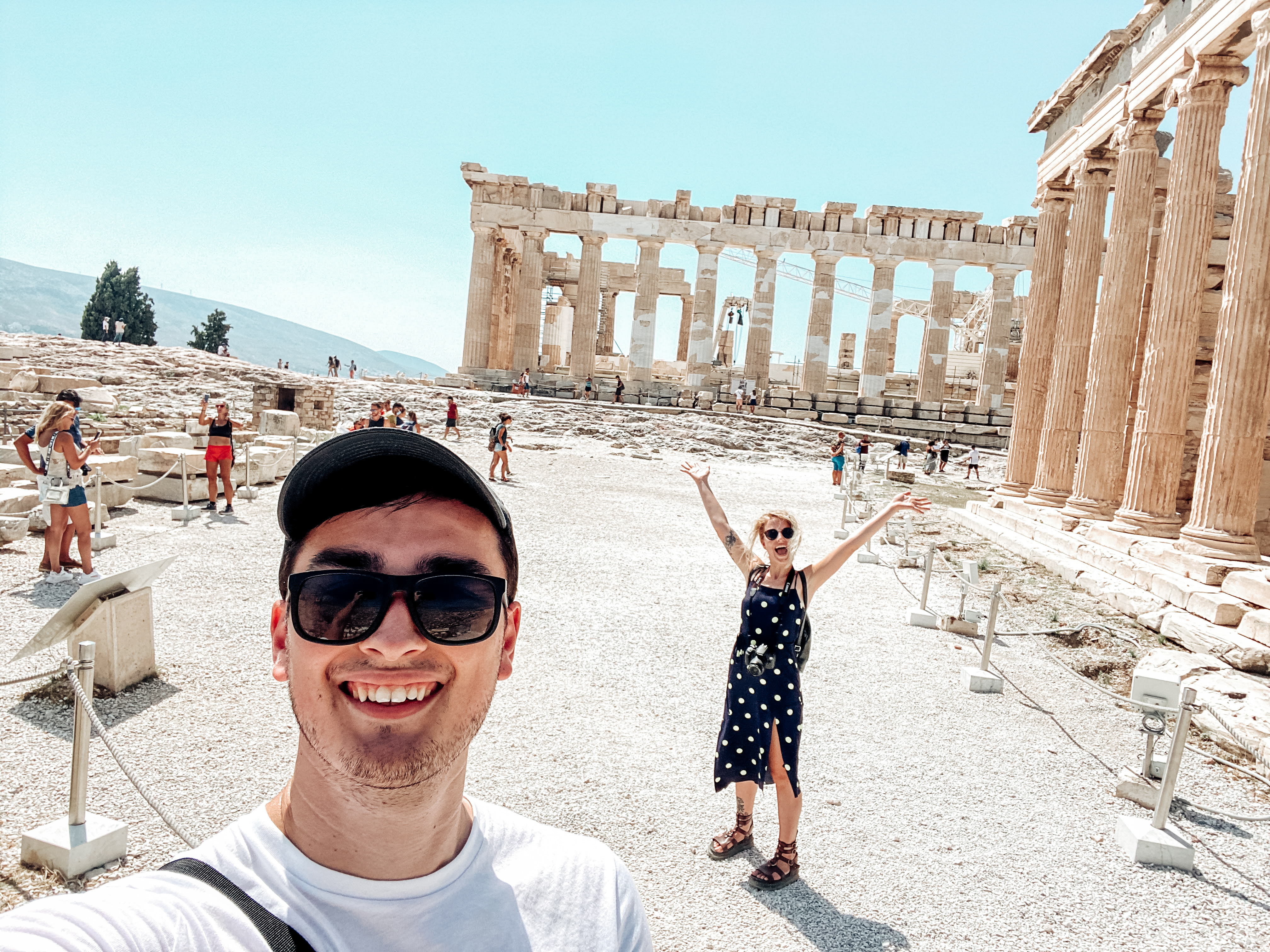 Upon arriving in Athens, I briefly glanced at a taxi sign that stated the bottom figure to the city centre one way would cost 35 Euros – I didn’t pay attention to anything else. I thought it seemed like a pricey amount considering Chris had done all of the booking for this trip and told me it was an inner-city airport. It’s not. The city is approximately a 40 minute drive from the airport – to which we were charged 50 Euros. In hindsight, I don’t know why we didn’t argue about it… we normally do when taxi drivers try to rip us off. Perhaps it was because our experience travelling here was a pleasant one and we didn’t want the taxi driver to taint it.

Our experience at Athens airport had been a simple and easy one – nothing of any note considering the current post-lockdown circumstance. It was pleasant to notice stewards monitoring the use of face masks – I appreciated the gesture, it felt secure and taken seriously.

You currently have to fill out PLF forms at least 24 hours before your flight to Greece. No one seems to tell you that you need to do this ahead of turning up at the airport, by which point it’s already too late. We only knew about this as we had seen horror stories in various news outlets such as this one here. 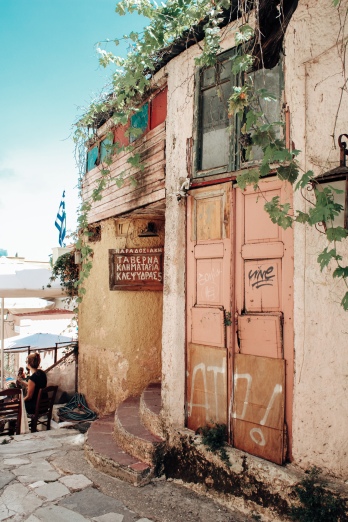 We started our own little tour of Athens on the Saturday morning, and I’ve attached a mapped of our walking route below. The beautiful thing about this route is that it forms a circle, so you can start/finish wherever you’d like! The route takes 1 hour of straight walking and includes the following:

You can pay for a 30 Euro ticket which will gain you access to all the attractions marked with a * above. You can collect one of these at the Greek National Tourism office at the entrance of the Acropolis, from automatic machines in the same location, or from the website (select the Acropolis & then purchase a combined ticket). The tickets are valid for 5 days and also give you access the Archaeological Museum of Kerameikos, Archaeological Site of Lyceum, Hadrian’s Library & Kerameikos – but we didn’t visit these on this trip.

We started the day with the Acropolis – albeit later in the morning than we had hoped. We planned to get there as soon as it opened at 8am to avoid to crippling mid-30 degree Celsius heat. Nevertheless, we overslept and then stopped for breakfast twice on the way to the entrance. The walk along Dionysiou Areopagitou is full of restaurants open for breakfast in the morning. With that in mind, by time we reached the Acropolis we were sizzling!

The 30 Euro 5-day ticket is worth it for the Acropolis alone, but if you only wish to see the Acropolis, you can pay a ticket of only 20 Euros – 10 Euros if you’re a European Citizen under the age of 25. There are also a number of free admission days that are advertised on their website. 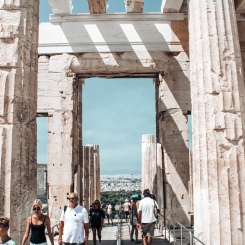 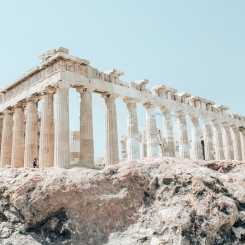 We then headed down towards the Roman Agora, which in reality, can be seen just as clearly on the outside of the gates.

Desperate for a sit down and some refreshments at this point, we stopped along Adrianou where there are a bunch of restaurants that impressively overlook the Stoa of Attales. We opted for the 33 All Day Bar Restaurant and we were pleased to say it served the best food we ate all weekend.

From here you can easily access the Ancient Agora of Athens, which is home to the most impressive preservations we saw all weekend – including the Temple of Hephestus!

Walking 20 minutes to the Monument of the Unknown Soldier, you can pass through the Minastiraki Flea Market – which is supposedly one of the best places to buy anything in Athens. It’s hectic, loud & hot in the flea market, and there isn’t much space to social distance if that is a current concern of yours. It is however, definitely worth the visit.

South of the Monument sits the National Garden – somewhere to escape the madness of the markets you’ve just witnessed. It’s also cooler here due to the shade provided by the trees. If we had been visiting for more than two days, we would’ve welcomed the opportunity to snooze here for an afternoon. There’s a cool turtle pool within the park – make sure you see this! Also, although we didn’t see it, Google Maps tells me there is an outdoor cinema situated in this park. This might be worth a research if you’re planning a visit soon.

If you’re walking south through the gardens, you’ll walk out and almost straight into the grounds of the Temple of Olympean Zeus. I run the risk of sounding really uncultured here – but all of these temples begin to merge into one unless you understand the contextual differences and history behind them. Luckily for me, Chris is a huge ancient Greece nerd – much like he is with the Romans. But for others, unless you’re really into this stuff… this kind of feels like a waste of time. 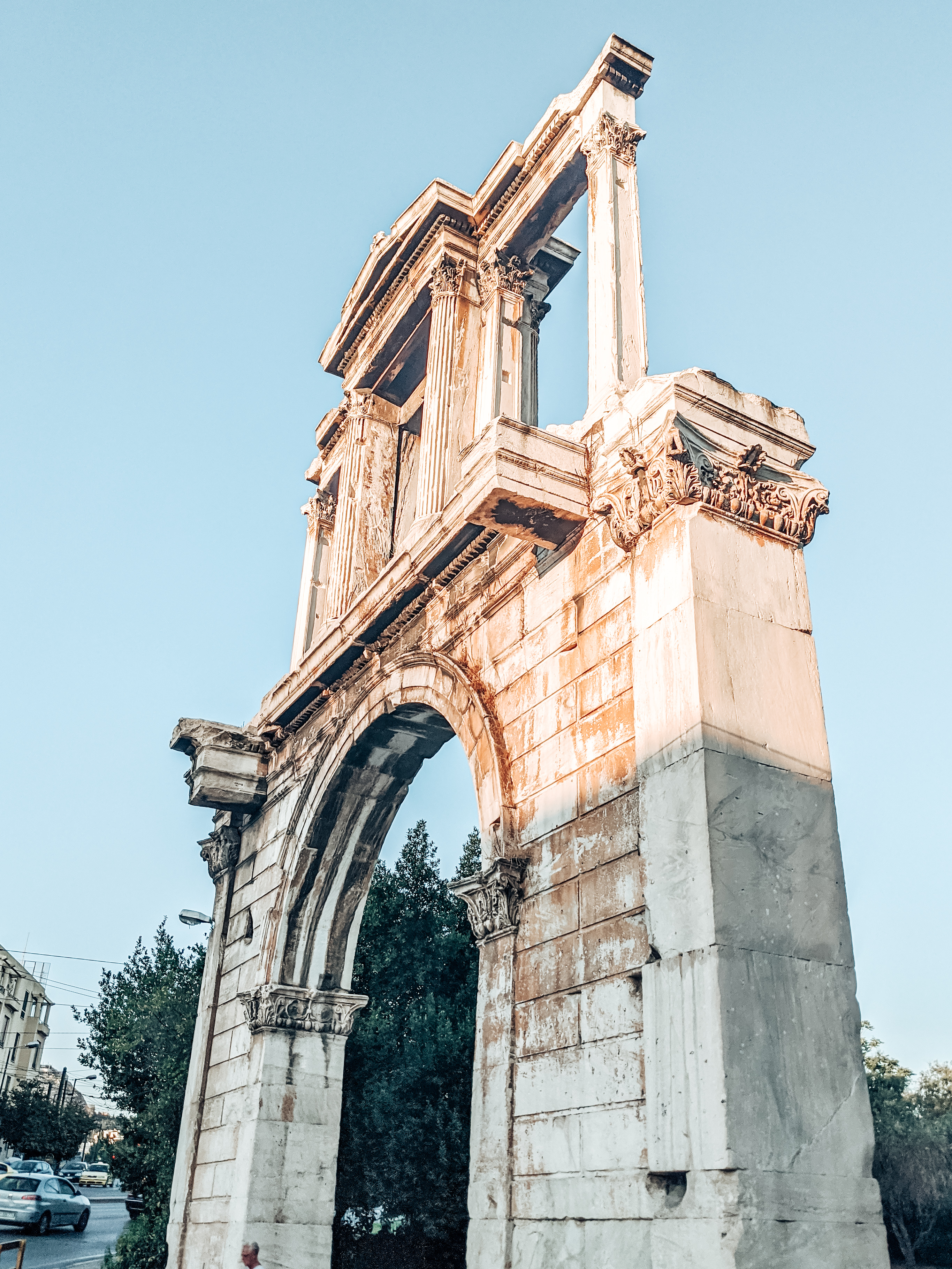 Lastly, there is Hadrians Arch which somewhat guards the Temple of Olympean Zeus. This is free to stand at the foot of, and is a refreshing difference to the other ancient Greek ruins scattered across the city, all mirroring one another’s architecture with the Doric, Ionic & Corinthian columns.

For dinner, I would recommend taking a wander down Kidathineon where you will approach a number of shops and restaurants surrounding the city park, or to the Choragic Monument of Lysicrates and eat beneath the trees overlooking the Monument. 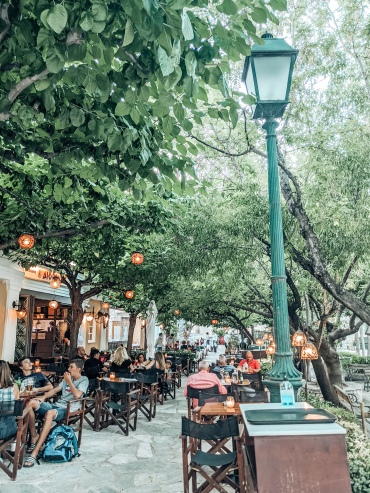 We rose bright and early on day two to pick up our hire car from Avis/Budget. We hadn’t planned on hiring a car over the weekend, but after being ripped off by the taxi driver from the airport we realised that the costs of another airport transfer and a bus to somewhere outside of the city, will roughly cover the hire car cost. The car actually cost about £80 for the day with all insurances included, we were allowed to drop it back off at the airport, and I haven’t got a bad word to say about the experience.

There is much more to see in Athens, but we hadn’t been abroad for 6 months which is a long time for us – and we wanted to get a good mixture of city & beach! The great thing is, Athens & the surrounding areas is perfect for this!

We headed south towards the Archaeological Site of Sounion, which is home to Poseidon’s Temple. In all honesty, it is much like the ruins in Athens – but coastal! 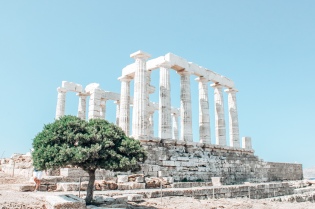 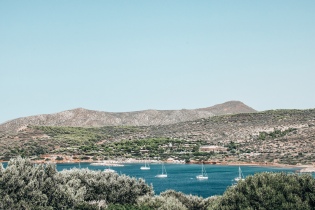 We stopped at a few beaches along the south-eastern coastline of Attica (this region of Greece), but unfortunately we’d forgotten towels so were looking for beach-side shops. The impression I got from these beaches was that they were locals only. Tranquil and almost untouched by tourism.

We eventually got to the town of Lavrio. It was vibrant and plentiful of locals enjoying their Sunday afternoons at a variety of restaurants. I really live for these kind of environments – and they had towels! We returned to the last beach we found, South Lavrio Beach. Tranquil and untouched as described before, but also very child friendly. We sunbathed here and swam here for a couple of hours before retiring back to Athens to freshen up & have dinner before driving back to the airport.

All in all, Athens is a fantastic place to visit for both inner & outer city gems. I haven’t even begun to mention the water travel network that departs from Pireas – Athens closest port, which can take you to all kinds of picturesque Greek islands! If I had to suggest the two “must see” parts of Athens, they would be the Acropolis and the Ancient Agora. As for post-COVID travel, Greece were one of the early European threats of a “second-wave”, but when we visited in August the culture towards adopting COVID practices couldn’t have been faulted. 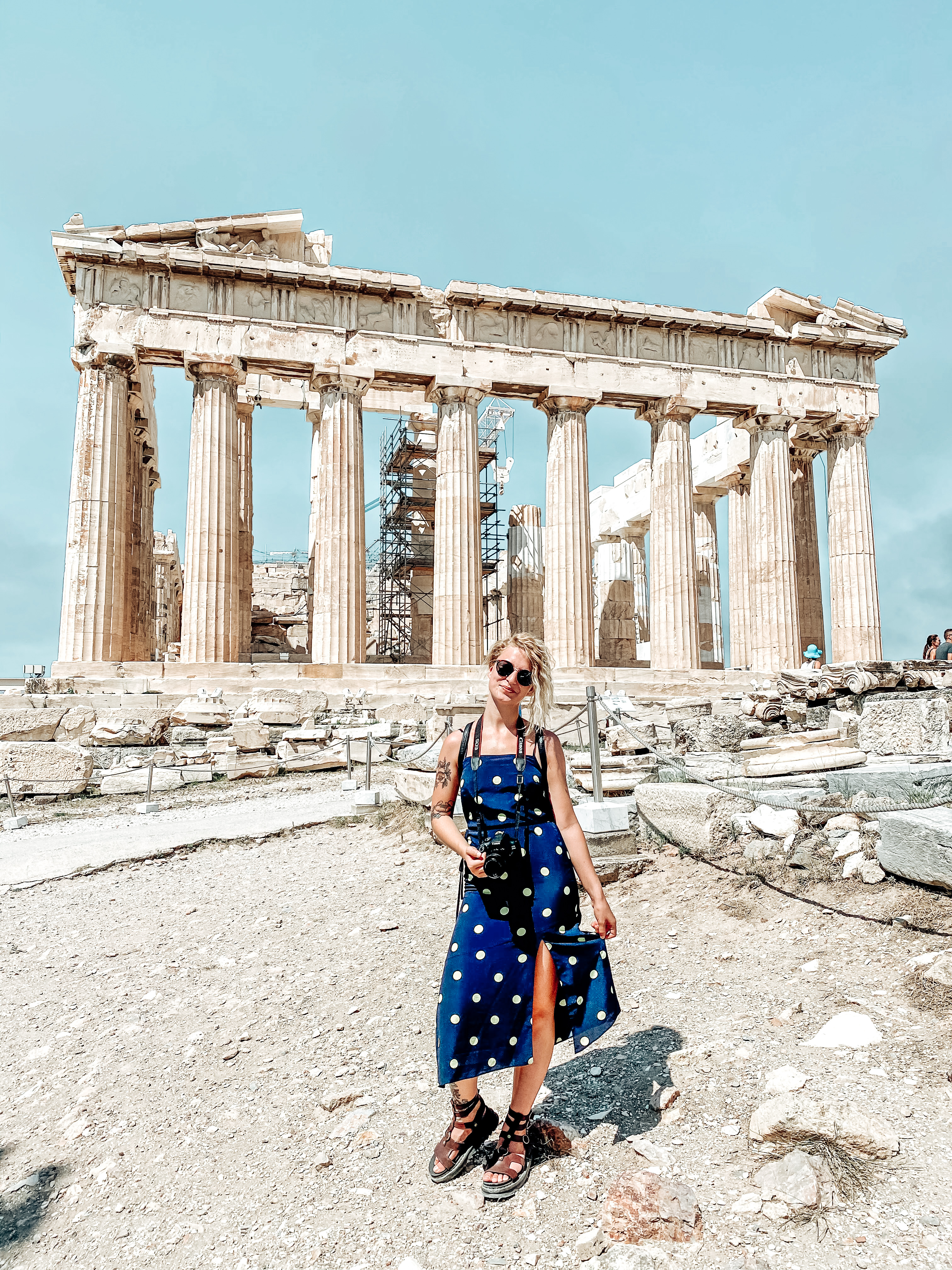 If you’ve enjoyed this post, it would be greatly appreciated if you could enter your email below for notifications on new blogs:

One thought on “2 days in Athens”