Back  in September 2015 I went on a coach trip travelling from the top to the tail of my favourite country – Italy! The architecture, the weather and the food are at the forefront of the reasons why I adore visiting Italy, and make an effort to travel there every year. And – if you read my first post – I have chosen to tie the knot there too!

The main places that aren’t included in this itinerary are Milan, Naples & Pisa. I haven’t yet visited Milan or Naples – and as for Pisa, I would recommend taking a long weekend to visit the city & travel along the Cinque Terre. Still, there is no reason why you can’t add these stops to the list if you wish to complete a fully-comprehensive trip.

As I completed this on a coach trip, the itinerary is designed to be travelled on the roads. However, I travel on the Italian trains whenever I visit and find them easy to use and very reliable (just remember to stamp your ticket before you board the train!). With good planning, I’m sure this itinerary is possible by public transport.

So without much more babble, here’s how you could see (almost) everything there is to see in Italy within 13 days:

Head straight to Piazza San Marco as this is the tourist (and pigeon) hotspot. The three big highlights here are the Basilica di San Marco, the Campanile di San Marco, and the Palazzo Ducole. In other words: the Cathedral, the Bell Tower and Doge’s Palace.

Doge’s Palace is the pricier of the three, though I would recommend visiting because there is arguably some of the most impressive art in the whole country to be seen here. I’ve visited Venice twice – and you guessed it – Doge’s Palace twice too. The palace also lets you walk across the Bridge of Sighs, if you’re interested in that.

The other notable part of Venice that is a must see is the Rialto Bridge, which is a 7 minute walk from Piazza San Marco.

You may want to get the classic picture in a Gondola in Venice. If you only plan on doing it once then maybe it’s worth the money, but from memory it cost me approximately 40 euros (per person). You can get equally as beautiful views from just wondering around the back streets – so don’t feel pressured into thinking this is a must. Also, as you’ve probably heard, the food is cheaper in the back streets too.

Day 3 – Visit Ferrara on the way to Tuscany

Ferrara is a pleasant stop to get lunch on your journey from Veneto to Tuscany. If possible, try to align this with the Antiques & Crafts market that appears in the main square on the first Saturday and Sunday of every month (except August). Hopefully you can bring back a unique souvenir!

Once reaching Tuscany, I stayed in Chianciano Terme which is a spa town situated south of Florence. I would recommend visiting a spa town whilst in Italy – they bring a certain kind of freshness that I can’t really put into words. Unfortunately, I don’t have much to say about this location’s tourist highlights, because I was out of the town more than I was in it during my stay…

Chianciano Terme is a good place to stop for a couple of nights because of it’s location. It is about a 1hour 40min drive from Florence & San Gimignano, and a 1hour 10min drive from Siena – all of which you will be visiting in the following days.

If you plan on travelling by train, I would recommend staying in Siena, because I know that services run regularly between Florence & Siena, stopping at Poggibonsi – which is the closest station to San Gimignano.

If you are altering the itinerary at this point to visit Pisa & the Cinque Terre, then I would also recommend the spa town of Montecantini Terme, which sits at a convenient distance between Florence and Pisa – all accessible by train.

At either the beginning or the end of your day, head to the Piazzale Michelangelo. This is the location of panoramic view of Florence that you will see in most postcard pictures. Also, there is a bronze cast of Michelangelo’s David – so if you don’t get chance to see the real thing then at least you’ve seen a replica!

My fiancé and I always make a point of climbing the highest towers everywhere we visit – so of course we had to get to the top of the Duomo in Florence! The views from the top of the “Cattedrale di Santa Maria del Fiore” are outstanding, though if you are not good with small spaces or accessibility may be an issue for you, then unfortunately I wouldn’t recommend visiting here. Also, it gets very hot on the trip to the trip so make sure you have a water bottle to hand!

We personally didn’t opt for queuing to see Michelangelo’s David because we had been advised it would take 2+ hours. Instead we came across a museum dedicated to Leonardo Da Vinci. Now, I must say I’ve been to a few Da Vinci museums in the past and this has to be the best one I’ve visited!

Between wondering the streets and shops, eating pizza, pasta and gelato, the day will pass pretty fast. If you do wish to see the real David, and also visit the Uffizi Gallery – I would recommend adding an additional day to your trip. We personally don’t feel the need to spend more than a day here, having since visited Tuscany twice since and not opting for a trip into the city.

When beginning my search for a wedding venue, I started in San Gimignano because we were so amazed back in 2015. If you aren’t already staying the night in the Tuscan countryside, then you will have to travel here to ensure you get to catch a glimpse of the beauty that this part of the world has to offer. 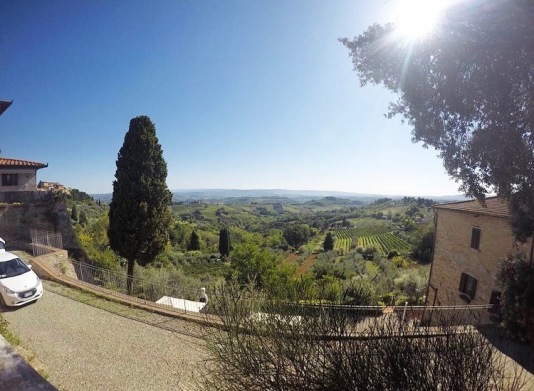 In short, San Gimignano is a medieval town that remains wholly within its historic walls, characterised by a skyline of several prominently standing towers. There is an authenticity found here that can be easily lost within tourist destinations and therefore, this is always the first place I recommend to people visiting Tuscany. You can also try some of the famous Vernaccia from San Gimignano for as little as 4euros a bottle!

There is a medieval torture museum here which is worth a visit. Although I had drunk a lot of above mentioned Vernaccia the night before and had a very oily lasagne for brunch – I have to say the museum is not for the faint hearted! Other than this, wondering around the streets and passageways is a recommendation. Though the town is situated on high ground, if you wish to see even better views you can climb the stairs to the top of the Great Tower (Torre Grossa) for 9euros, which also includes entry to all of the civic museums in the area.

There are regular coach trips to San Gimignano from the surrounding towns & cities. The nearest train station is Poggibonsi, though it is a 15min drive and taxis are not regular, you can call a private taxi but it will cost 20-25euros each way. 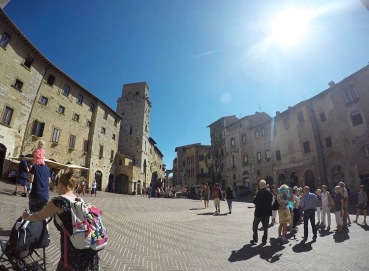 As for Siena, we were so hungry by time we arrived that we headed straight for food. Unfortunately the disadvantage of travelling with a coach tour is that time is limited is some places. Siena seemed equally as endearing as any other place I’ve visited in Tuscany, and I will definitely make an effort to revisit here in the near future as my wedding venue is 30 minutes away…

Day 6 – Visit Orvieto on the way to Rome

If you are travelling from Chianciano Terme, the journey to Rome will take nearly two hours. So with a minor detour, you can stop in Orvieto about 45 minutes on down the road. You will have to park at the bottom and either walk up to the city of Orvieto, or catch the funicular to the top.

Historically, Orvieto was a major control point of the roads between Rome and Florence, and because of its high position sat upon a chunk of volcanic rock, this location once held significant power. Interestingly the geological set up of Orvieto meant that a series of caves were created beneath the city whereby the city’s workers operated from, and noble families escaped during siege. There is supposedly more than 1200 tunnels, so I would highly recommend a tour of these caves to gain a real understanding of the majesty.

Orvieto is one of the more religiously influenced areas of Italy that I visited on this tour, so you may need to bear this in mind. You will find across Italy that you are asked to dress conservatively when entering religious areas. Both men and women should consider covering their shoulders and knees to respect the culture and avoid any awkward encounters with locals.

Due to the history of Italy, the South of the country differs significantly from the North, so I felt this was an appropriate place to take a natural break. Up next, days 7-13 which include: Rome, Pompeii, Sorrento, the Amalfi Coast, Capri & Sicily!