Though we got to know each other whilst on holiday in Tenerife, my first trip abroad with my partner followed a year later in Corfu. I often hear couples disregarding Corfu as a holiday destination because the reputation it has gained with Kavos… And as predicted, we were the only people on the coach heading to the South of the island who wouldn’t be joining the party-goers!

We visited Corfu in July 2015, so hopefully not too much has changed! Well for starters, it seems the hotel we stayed at has re-branded. What was once the Aquis Sandy Beach Hotel, is now the Labranda Sandy Beach Hotel. This was a beach side hotel in Agios Georgios, typical of those that I had only previously seen in Tunisia. Nevertheless, it was full of character, clean and home to a beautiful beach (Issos Beach) situated next to a handful of great restaurants! However, it is not the hotel that made this island so great…

Upon our first venture out of the hotel, we booked our excursions and came across a “Rent-a-bike” facility – which our skeptical selves would usually walk past and ignore for fear of being scammed (*insert standard horror story of being followed by men with baseball bats in Ibiza, ready to smash up the bike you haven’t paid insurance for*). Despite this, the owner of the shack – George – caught us in conversation and reassured us that everything was “proper”.

We rented a buggy for the day and George recommended a few places around the South of the island. He even recommended staying away from Kavos because of the smell!

The highlight of the day was definitely taking the winding road up to the sights from the heights in Chlomos. Though I would recommend driving with care! George would only recommend this route for buggy users, not quad bikes.

At our last stop, the buggy broke down. But true to his word, George came out and towed us back after a panicked phone call.

We returned to George a couple of days later and hired a quad bike to take us round to the Lake Korrision and Gardiki Castle. Though, if strapped for time on your visit, I wouldn’t recommend squeezing these in your trip.

George recommended a lady who makes her own wine near Lake Korrision – which I wouldn’t be able to pinpoint on a map – but this visit is a must! We pulled up outside of a tiny house with no signs, looking very perplexed I’m sure. The little lady came running out with her arms up in the air in excitement that we were there. She pulled us inside her house and poured us tasters of her wine – white, rose and red. I say tasters… these were half glasses of each wine per person. She didn’t speak a word of English but managed to explain that they were 4euros a bottle.

Now, had this have happened in the UK it may sound like the beginning of a horror story. But, there is an honest and trustworthy sense of being around people in Corfu. They are some of the friendliest and most hospitable people I have ever met. They seem to make great wine too.

Petriti is a quaint fishing village. We did stop here in our buggy travels but nothing prepared us for our experience at night!

We purchased a coach return journey for approximately 10euros each, and headed over to the local fishing festival one evening. The locals – though again, not speaking any English – invited us into their local church for bread and wine, and sang and danced in traditional Greek form for the rest of the night. I honestly felt like I had stepped into a scene from Mamma Mia.

I don’t know if this is a regular phenomenon, or an annual celebration. But I doubt this experience was unique to Petriti. Have a search for local festivals in the villages around you when you take a visit! It’s without a doubt an unforgettable experience. 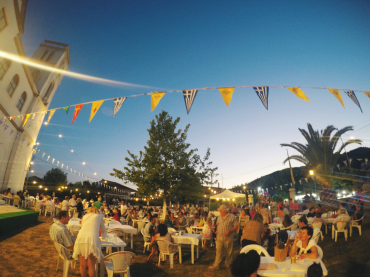 I’m not sure I need to write too many words about why visiting here is a MUST, because a simple Google Image search does it enough justice.

We visited here twice, once to scuba dive and again to sight-see the port towns. It was a good couple on hours on a ferry each way, and I can’t remember the cost… but honestly, this was one of the most BEAUTIFUL places I’ve ever seen. 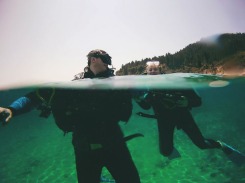 Overall, we only spent 5 days here and it was the perfect first trip abroad for the two of us. The hotel and beach were perfect for any lazing around and sunbathing, yet there was an abundance of adventurous activities to take part in. Inevitably, the coach back to the airport was full of teenagers in “I ❤ Kavos” T-shirts, covered in neon paint. However, do NOT let stories of Kavos put you off visiting for a romantic break in South Corfu. If you’re that bothered about rowdy teenagers, you could always try a private transfer from the airport!